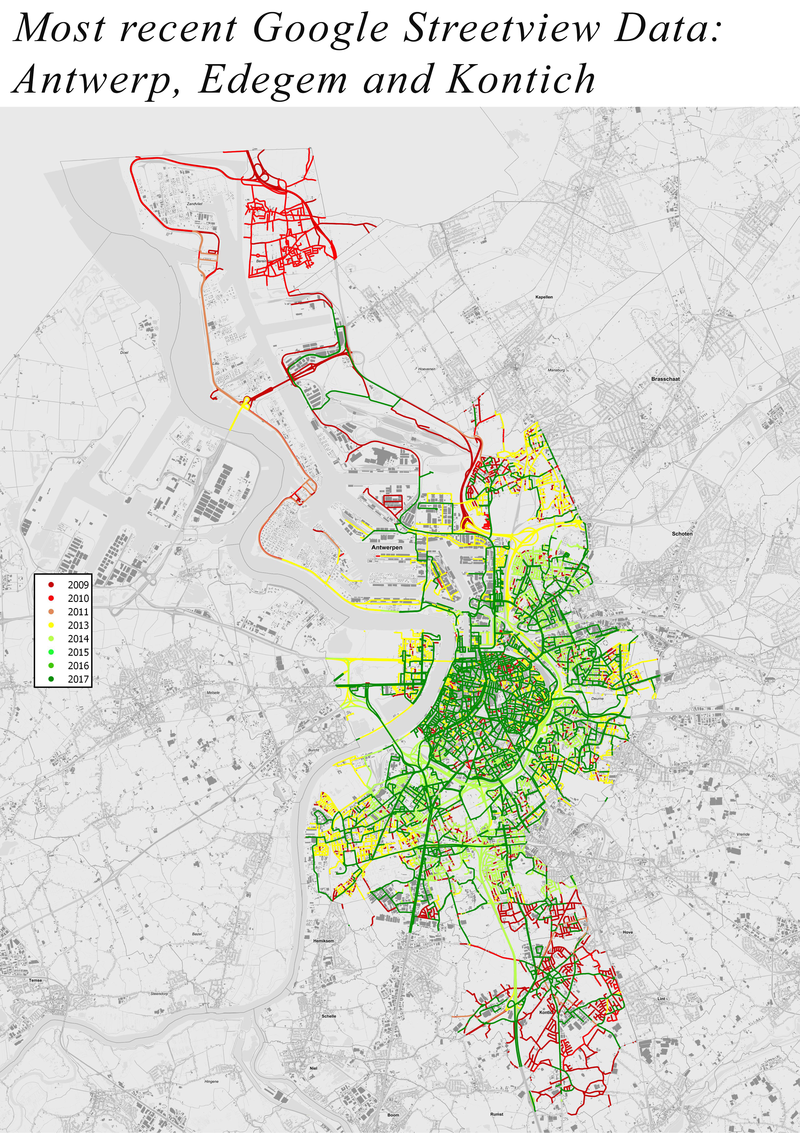 Google Street View data anything but complete for Belgium

On December 14, 2017 Google made the Belgian Street View images photographed in 2017 available to their users.  For the municipalities Edegem and Kontich and for the city of Antwerp I checked the Street View images in detail to see when these images were photographed. According to the results they appear to be far less complete than the images made in the years 2008-2009.  A sample survey in the rest of Belgium confirms these results. This means that for most places in Belgium the most recent Street View images are almost 10 years old.  Furthermore it’s not to be expected there will be updates in the next couple of years.

What’s captured and what’s not?

If you look at the data for Edegem and Kontich, you’ll see that that in these municipalities Google only photographed Street View images in the streets around both town halls and in some of the business parks. During the data collection in 2013/2014 the southern half of Edegem and entire area of Kontich also weren’t covered. This makes that for most streets in these municipalities  the only Street View images available are from the period 2008/2009.

Besides complete checks in these three municipalities, I also did a sample survey for all kinds of other regions in the country and the situation seems to be very similar all over Belgium.

In the period 2008-2010 360° images of the entire territory of Flanders where made for AGIV that are very similar to Google Street View.  At first these images were used to update the Traffic Sign Database of Flanders. After that the images could be used by Flemish government agencies, local governments and utility network companies.

Between October 2014 and September 2016 new 360° images of the entire territory of Flanders where made for Agentschap Informatie Vlaanderen (AGIV became a part of this new government agency). Again these images were only available for participants of GDI-Vlaanderen and employees of GRB charge liable organizations (GRB-heffingsplichtigen). Unfortunately this Flemish government database isn’t opened up for the general public. It’s not clear when  Agentschap Informatie Vlaanderen will collect another series of images, but it won’t be before the end of 2018 because of budgetary reasons.

Since 2013 the open data project Mapillary started to make images on street level of the entire planet. The images of Mapillary are made by volunteers using action cams and mobile phones.  Because of this methodology most of the images are different from Street View,  as you can’t rotate the view in the same way as in a 360° image. Because 360° cameras become available for everybody, they also started to add real 360° images through the project Mapillary 360.

Of course Mapillary didn’t manage to photograph the entire world in 5 years time with the help of volunteers. In Belgium there are some very active Mapillary volunteers, so some regions are very well covered during the period 2016-2017. Mainly the area between Brussels and Antwerp, but also Leuven, Bruges, Ostend and Roeselare are very well photographed. If your area is missing, you can easily do it yourself with the help of your smartphone or actioncam and the Mapillary app.

An extra advantage of Mapillary is that for both QGIS 3.x and ArcGIS Pro plugins are available that can show the images directly in your GIS software. 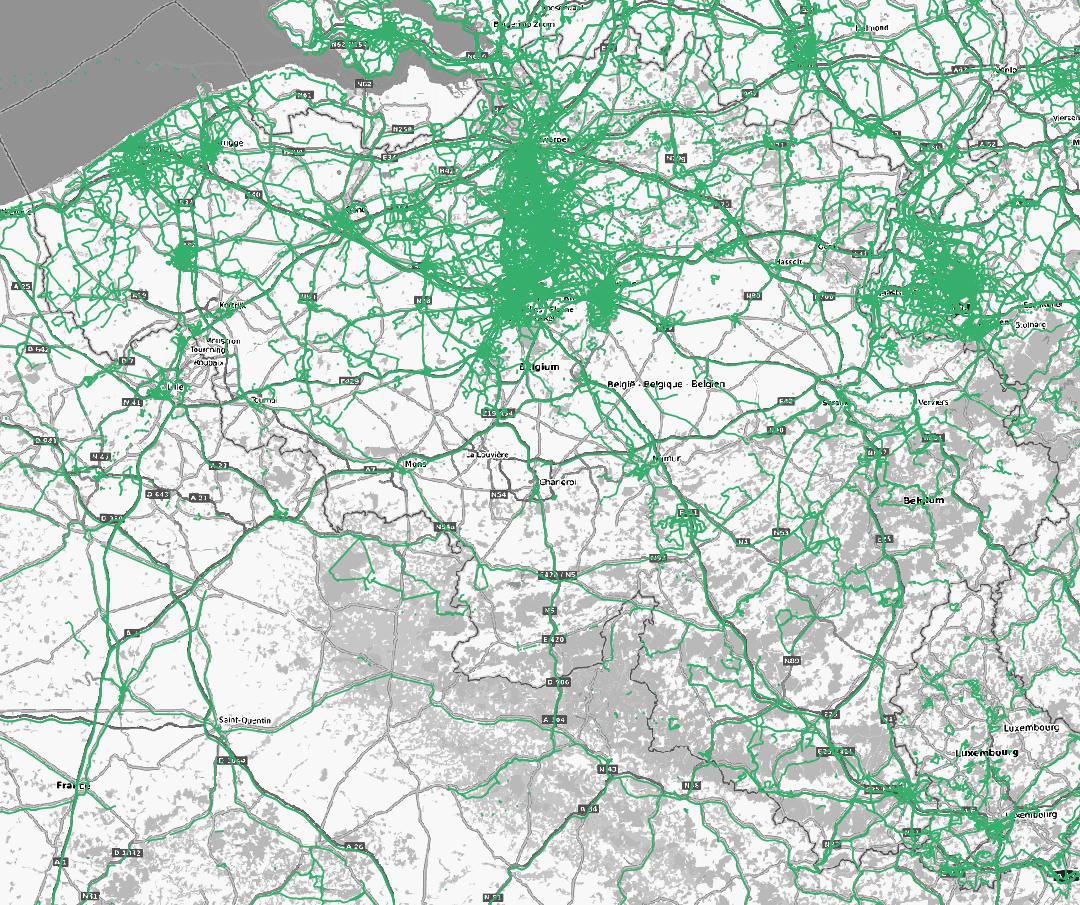 OpenStreetCam is an open data project very similar to Mapillary, but it started as source of information for the volunteers of OpenStreetMap. At first OpenStreetCam was called OpenStreetView, but becuase of copyright claims they had to drop the term ‘Street View’ from their name. For the OpenStreetMap open data maps, the Mapillary images are also used very often.  Unfortunately OpenStreetCam doesn’t have many images for Belgium.  It mainly has images of the highways in the country. 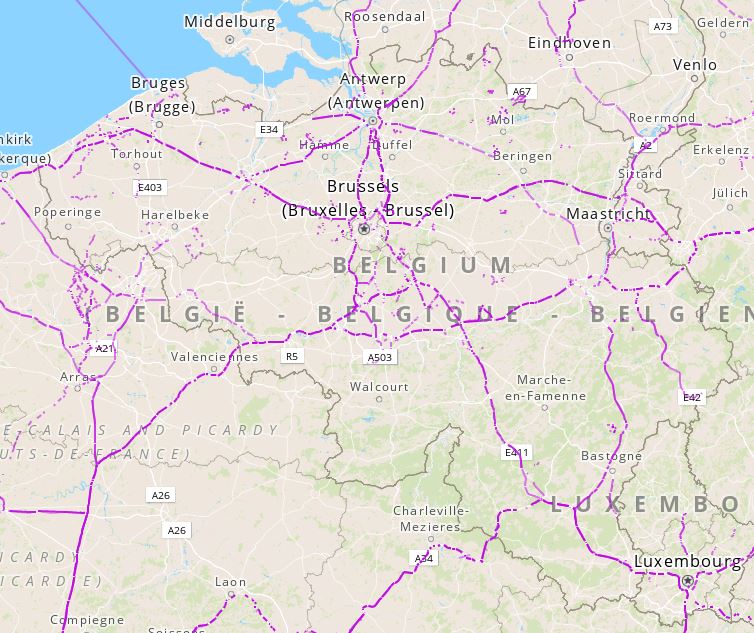 In the United States, Spain, France and the United Kingdom Google Street View has a little competition of eternal rival Microsoft, with the product Bing Streetside.  Technical it’s very similar to Google Street View, but it’s only available in a limited number of countries. In Belgium Bing Maps has no Streetside images and for now there is no reason to ever expect them.

Have your own images made

There are a number of different Belgian and foreign companies active in Belgium on the 360° images market.  So can you can buy yourself these kind of images just like Agentschap Informatie Vlaanderen did. The price of such a data collection will mainly depend on the total road distance you want to be photographed. Main advantage is that just the places are photographed that you need. For example in the Netherlands 360° images are made of all rivers and canals. Big disadvantage is of course the price. For a small municipality it’ll cost at least a couple of thousand of euros to make standard 360° images of it’s entire territory. If you want HD images it’ll cost you at least €10.000.

By limiting the areas photographed for Google Street View in 2017, the usability of it will  diminish very fast.  Because of this open data projects like Mapillary will gain importance on the medium term and take over the role of Google Street View.

The data used to create the map above this article can be downloaded from pCloud..